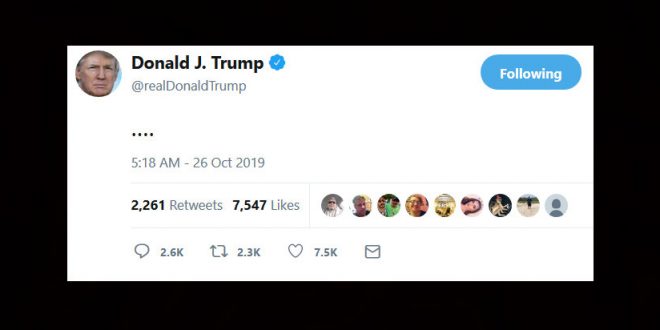 President Donald Trump attacked California Senator and Democratic presidential candidate Kamala Harris over her decision to pull out of a criminal justice forum in protest of Trump’s appearance there.

On Friday night, Senator Harris announced she was pulling out of the Second Step Presidential Justice Forum at Benedict College — a historically black college (HBCU) — citing Trump’s history of “racist behavior” and the exclusion of all but seven students from an event at which Trump was honored.

On Saturday morning, Trump lashed out at Senator Harris in a series of tweets that included one which consisted only of four dots, and another that contained the non-word “recieved.”

Badly failing presidential candidate @KamalaHarris will not go to a very wonderful largely African American event today because yesterday I recieved a major award, at the same event, for being able to produce & sign into law major Criminal Justice Reform legislation, which will..

….greatly help the African American community (and all other communities), and which was unable to get done in past administrations despite a tremendous desire for it. This and best unemployment numbers EVER is more than Kamala will EVER be able to do for African Americans!

Quick! Nobody get the defriibulator!

He is doing what Giuliani did but no recording.

Clearly this is a cry for help to Vladimir Putin

Previous Pentagon Scorns Amazon, $10B Job Goes To Microsoft
Next Harris Hits Back At Trump: The Only Part Of Criminal Justice You Can Claim Credit For Is The “Criminal” Part