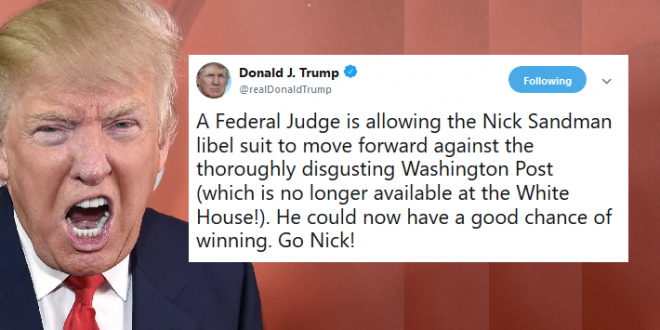 A federal judge has reopened the $250 million defamation case filed by a Covington Catholic High School student against The Washington Post. The lawsuit can move forward but the focus is much more specific. In the lawsuit, Nick Sandmann accuses The Washington Post of libel, saying stories written about the January incident in Washington, D.C., shed a negative light on him, which led to him being disgraced on social media.

Attorneys Lin Wood and Todd McMurtry filed the lawsuit on behalf of Sandmann and his family. It was the first in a series of lawsuits filed against several media outlets. The lawsuit claims that the Post “wrongfully targeted and bullied Nicholas because he was the white, Catholic student wearing a red ‘Make America Great Again’ souvenir cap on a school field trip to the January 18 March for Life in Washington, D.C.”

A Federal Judge is allowing the Nick Sandman libel suit to move forward against the thoroughly disgusting Washington Post (which is no longer available at the White House!). He could now have a good chance of winning. Go Nick!