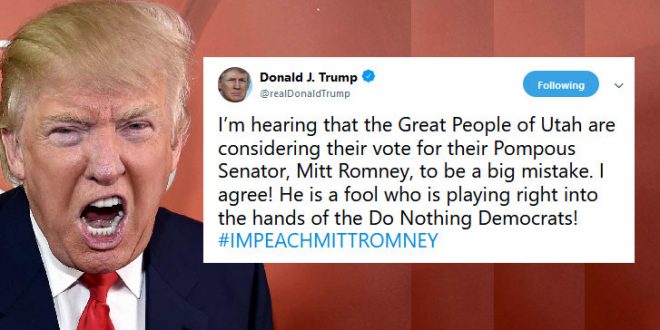 Yesterday Mitt Romney tweeted out relatively tepid criticism of Glorious Leader that was notable only because he was the first and so far only prominent sitting Republican to speak out.

Other Republicans doubtlessly feel like Romney does, but have so far refused to say anything, probably in part because they rightfully fear the nuclear firestorm of abuse and death threats that will rain down upon them from the MAGA hats.

And now Glorious Leader, as he so often does, is aiming his army of trolls directly at a fellow Republican, laughably claiming that there’s a movement to impeach Romney.

I’m hearing that the Great People of Utah are considering their vote for their Pompous Senator, Mitt Romney, to be a big mistake. I agree! He is a fool who is playing right into the hands of the Do Nothing Democrats! #IMPEACHMITTROMNEY