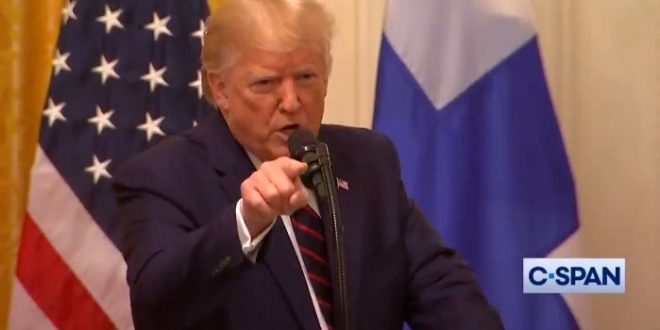 Trump: Biden And His Son Are “Stone Cold Crooked”

In an increasingly acidic political atmosphere, President Donald Trump on Wednesday repeatedly lashed out at Democrats in Congress for pursuing an impeachment investigation, again saying his conversation with the leader of Ukraine was ‘perfect,’ and not an effort to get compromising information about former Vice President Joe Biden and his son.

Some of Mr. Trump’s toughest words on Wednesday were reserved for House Intelligence Committee chair Rep. Adam Schiff (D-CA). “He should be forced to resign from Congress,” the President said. “And frankly, they should look at him for treason. He’s a low life.”

“Biden and his son are stone cold crooked,” Mr. Trump said, as he refused to answer the questions posed by Jeff Mason of Reuters.

President Trump: “Biden and his son are stone cold crooked.”

Mason asks over and over what he wanted Zelensky to do with regard to the Bidens. Trump is pointedly refusing to answer. Eventually, he demands that Mason ask a question to the president of Finland, advising him not to be “rude.”

Trump: “Much of the media in this country is not just corrupt it is fake.” He declines to directly answer what he wanted the Ukrainian president to do w. Bidens. He even scolded Reuters Jeff Mason at one point.

May be a first of its kind for any presidential news conference:

Jeff Mason repeatedly asks Trump to clarify what he wanted Zelensky to do:

“Are you talking to me?” Practically yells at Mason to ask the Finnish leader a question instead; Rips “fake” and “corrupt” U.S. media.

Jeff Mason is a total pro. That was textbook. Play the tape in journalism schools.

“Are you talking to me?” White House press conference reaching “Taxi Driver” levels of tension as Jeff Mason tries to get a direct answer from Trump to his question.