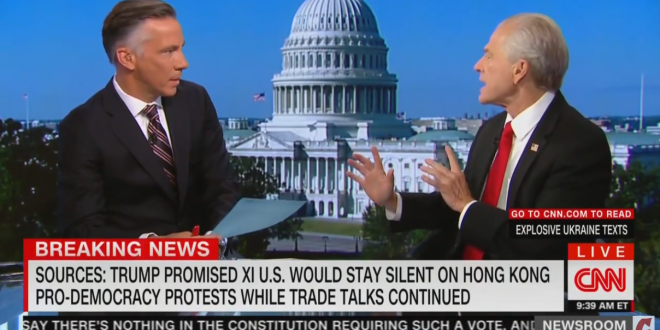 Trump Advisor Peter Navarro Blows Up In Wild CNN Interview, Won’t Say If He Talked About Biden To China

During a combative exchange with CNN’s Jim Sciutto, Navarro slammed the network’s reporting that President Trump spoke about Biden’s political prospects during a June call with Chinese President Xi Jinping without denying its accuracy.

Asked multiple times if he had ever personally broached the idea of investigating Biden during his conversations with China, Navarro refused to answer directly.

Employing the “best defense is a good offense” tactic so often used by Trump and his administration officials, Navarro refused to answer Sciutto’s specific questions, instead of blaming reports for being sourced by a single, anonymous source. And that defense continued despite Sciutto’s repeated and admirable effort to get Navarro to address his questions.

Sciutto asked his guest how he reacted he heard the president yesterday call on China to investigate an American. Navarro replied “Is this like an interrogation here? It is like I feel like I’m Adam Schiff is sitting in front of me.”

Sciutto reminded Navarro that he is a journalist and “asks questions of Democrats and Republicans every day.” Navarro repeated his claim that “this is like an interrogation,” before ignoring the question entirely with “this is witch hunt part two.”

CNN has Peter Navarro on right now. My dog, who does not even have his undergraduate degree, knows more about trade and economics than Navarro. No, I’m serious. Because my dog knows nothing. But everything Navarro knows is wrong. (My dog however, is a v. good boy.)

Oof. White House trade adviser Peter Navarro’s latest CNN interview was a disaster. His only rebuttal to @jimsciutto‘s line of questioning was to deflect by attacking him and calling Adam Schiff a “sociopath.” What an embarrassment. pic.twitter.com/PUqSBa7i45

Peter Navarro on @CNN: “I’m never disappointed in my President.”

A Trump adviser took exception to questions about the President’s actions involving a foreign government, calling it “an interrogation.” @JimSciutto politely reminded him the job of a journalist is to question those in power. pic.twitter.com/DGmB4GOrRd

“I will never talk about what happens inside the White House. Okay? Not confirm or deny. Because that’s the slippery slope.” pic.twitter.com/XQRu2pAjAb