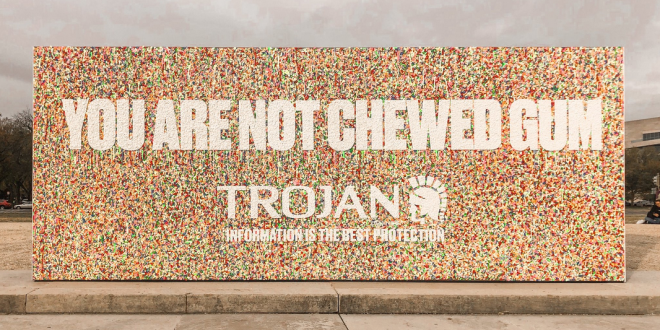 Since 1981, Congress has spent over $2.2 billion on shame-based, abstinence-only sex education programs—even though data shows that those very programs are failing. One 2011 study funded by the University of Georgia Research Foundation concluded teens in states that prescribe more abstinence education are actually more likely to become pregnant.

Comprehensive sex education curriculums could be the solution for rising STI and teen pregnancy rates, yet the Trump administration has chosen instead to employ strategies to police young women’s bodies.

Young people are speaking back—and demanding better from their national leaders. In partnership with Trojan, Advocates for Youth today will erect a 20-foot activist billboard covered in chewed-up gum speaking truth to power. “You Are Not Chewed Gum,” it will read. “Information Is the Best Protection.”

It’s not unusual for abstinence-only programs to compare people (let’s face it — mostly young girls) who have sex before marriage to used gum, or roses without petals, or tape that is no longer sticky. The harmful (and baseless) message is that sexually active people have lost their value for a future spouse.

It’s not only objectifying on a non-religious level. From a Christian perspective, it implies that sexual sin is somehow the only one Jesus can’t redeem.

Teenage boys, on the other hand, are all but expected to have sex before marriage — and they’re easily forgiven for it — because, they’re told, they were created to be slaves to their impulses. It’s up to young women to keep them in check by covering themselves up and wearing those metaphorical chastity belts.

Today, Trojan and @AdvocatesTweets are taking a stand for honest, inclusive sex education and challenging abstinence-only programs in schools with a gum wall in Washington D.C. Learn more at https://t.co/mysXB06NrX. #NotChewedGum #InformationIsTheBestProtection pic.twitter.com/RbJtdeWAzg

Was given the torn paper heart lesson in school. We were told that once we met the person who we were supposed to marry all we would have to offer them was a broken heart. #NotChewedGum

I was taught “purity culture” and given a promise ring in Sunday school when I was 14. I was not sexually active but my best friend who was older was, and she was called chewed gum or a dirty cup among other things. This is specifically for kids like us.

My former church taught us teen girls at least every other month about how if we are not pure when we get to the wedding alter we are comparable to chewed gum. The man that taught this also raped me & my friends when we were 15.

Paper that had been glued together, and then ripped apart. Just one of the analogies from youth group

Previous Fox’s Napolitano To GOP: Stop Smearing The Process
Next Reuters: Spies Hacked WhatsApp To Snoop On US Allies