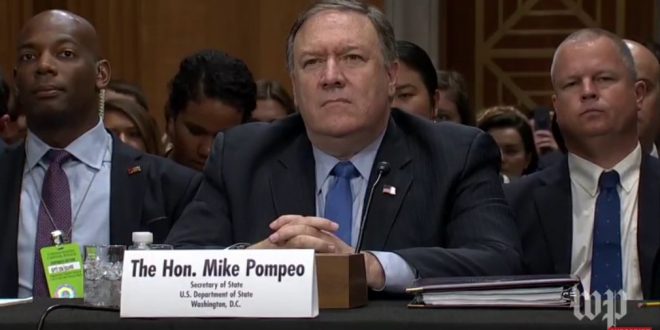 Secretary of State Mike Pompeo sent a letter to the House Foreign Affairs Committee on Tuesday accusing Democrats of “an attempt to intimidate, bully, and treat improperly” officials from the State Department who have been asked to cooperate in the Trump-Ukraine investigation.

The chairmen of the House Foreign Affairs, Intelligence and Oversight committees responded to Pompeo on Tuesday afternoon, accusing him of “stonewalling” and claiming that he may be a “fact witness” in the impeachment inquiry following reports that he was on the now-infamous July phone call between Trump and Ukrainian President Volodymyr Zelensky.

“He should immediately cease intimidating Department witnesses in order to protect himself and the President.”https://t.co/AnoqbtSwwJ pic.twitter.com/gKsJhcMKyB

The chairmen of the House Foreign Affairs, Intel and Oversight committees have responded accusing Pompeo of “stonewalling” and claiming that he may be a “fact witness” in the impeachment inquiry following reports he was on the July Trump-Zelensky callhttps://t.co/UI0bJjQ2ss

JUST IN: House committee chairs warn Pompeo that stonewalling could be used as evidence of obstruction https://t.co/IAWTlO7tdq pic.twitter.com/oAqBEvTJdr