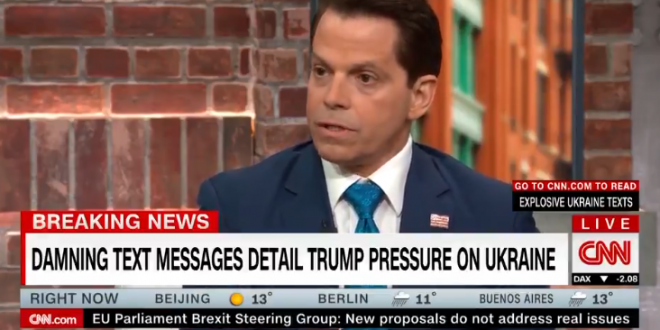 The Mooch: Trump Is A “Traitor To The US” [VIDEO]

Former White House communications director Anthony Scaramucci on Friday called President Trump a “traitor” to the U.S. while discussing the president’s dealings with Ukraine. “The American president is a traitor to the United States. He is literally the most un-American president that we’ve had probably since Andrew Johnson,” Scaramucci said on CNN.

“The American President is a traitor to the United States,” former White House Communications Director @Scaramucci says after text messages detail how a desired meeting with Trump put pressure on Ukraine. https://t.co/oXize6soH9 pic.twitter.com/lk3flpatnC

Previous House Dems To Pence: Hand Over Your Ukraine Docs
Next BOOK: Trump Flew Into Rage Over Drudge Headline