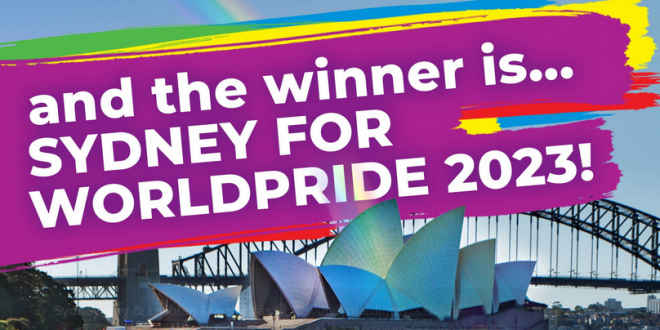 Sydney has won the right to host the international WorldPride event in 2023 after defeating Montreal and Houston in a vote in Athens on Sunday. Members of the worldwide InterPride network voted for Sydney to host the event in 2023, which will coincide with the Gay and Lesbian Mardi Gras.

Federal Tourism Minister Simon Birmingham said it will be an event not to be missed. “It is absolutely fitting that Australia and particularly Sydney celebrate our diversity through such a symbolic event that will also deliver a huge boost to our tourism industry,” Senator Birmingham said.

WorldPride 2019 was held in New York City to coincide with the 50th anniversary of the Stonewall Rebellion.

Members of the worldwide InterPride network of Pride organisations voted between Sydney, Montreal and Houston as the host city for WorldPride 2023. We won with 60% of the vote.

❤️ WE THANK YOU ALL SO MUCH!!! pic.twitter.com/kEViSaqMt0

The real takeaway of Sydney winning the WorldPride 2023 bid is that if you live outside Australia and have ever flirted with an Australian online you are actually legally obligated to visit us during that time.

We’re bursting with PRIDE! Congratulations to our very own harbour city, Sydney, in being crowned the host of WorldPride 2023! This will coincide with Sydney’s iconic annual Mardi Gras festivities. Bring on the rainbows! 🏳️‍🌈🌈 #AllOfTheLove #WorldPride2023 pic.twitter.com/ZAzAFrxZyH