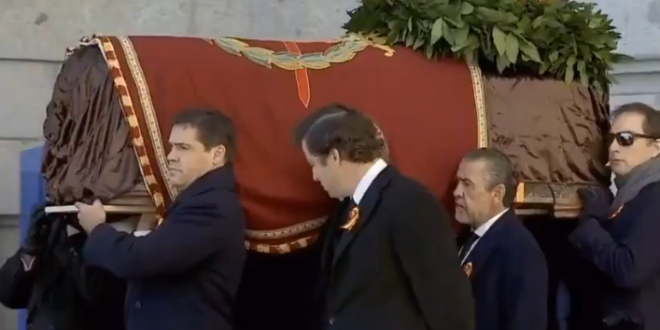 The Spanish government on Thursday exhumed the remains of the former dictator Gen. Francisco Franco from the underground basilica that he built after winning his country’s civil war. The move had prompted criticism that, coming just two weeks before a national election, it would reopen old rifts in Spanish society.

Franco’s remains were moved in a coffin from the basilica where he was buried in 1975 and was on its way to a cemetery near Madrid that contains a family crypt where his wife is buried and that is beside El Pardo palace, which Franco used during his rule.

The exhumation followed a yearlong judicial battle between the caretaker Socialist government of Prime Minister Pedro Sánchez and relatives of Franco who had sought to reverse the decision. Mr. Sánchez recently told the UN General Assembly that Spain would take the action because “no enemy of democracy deserves a place of worship or institutional respect.”

Spain removes General Francisco Franco’s remains from a state mausoleum, seeking to exorcise the ghost of a dictator whose legacy still divides the country https://t.co/D5OBdlclma pic.twitter.com/BV8ydHhByK

The remains of Spanish dictator Francisco Franco are finally being moved from an opulent mausoleum to a discreet grave, 44 years after his death. pic.twitter.com/x313gvBqXD

Breaking News: Spain began exhuming Gen. Francisco Franco, the former dictator, from where he was buried in 1975. Critics said it would stir painful memories. https://t.co/xd487tHChr

Spain has exhumed the embalmed body of Francisco Franco from a grandiose state mausoleum in order to relocate it to a more discreet grave | https://t.co/tBxfnY2R8I pic.twitter.com/jVfnFw1iCS

Shouts of “Viva #Franco” are heard while some attenders exhibit pre-constitutional flags and others perform the #nazi salute. The priest officiating the Mass is the son of Antonio Tejero, the general who led the failed coup against #Spanish Congress on Feb 23, 1981 pic.twitter.com/cNuEOoXqDR