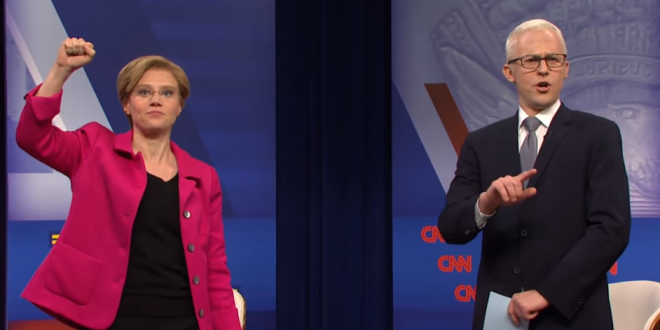 Democratic presidential candidates, Billy Porter and an unexpected kiss were all part of the cold open on “Saturday Night Live” this weekend. This week’s CNN LGBTQ town hall was prime fodder for lots of laughs and cameo appearances during Saturday night’s episode.

Alex Moffat’s Anderson Cooper said they were “going to go out – all out,” bringing out “Pose” star Billy Porter to the stage, in the first of many guest appearances during the opening sketch.

Porter served up hilarious introductions for all the candidates, starting with Chris Redd’s Sen. Cory Booker: “He may live in the projects, but ladies he ain’t no project!”

After being widely criticized for excluding Julián Castro from a debate sketch that included nine other top Democratic hopefuls in its season opener, “Saturday Night Live” got Lin-Manuel Miranda to step in as the Latino presidential candidate.

The “Hamilton” creator performed as Castro in a cameo that spoofed CNN’s campaign town hall on LGBTQ issues, “Equality in America.” “As a Democrat. I want to apologize for not being gay,” Miranda’s Castro says. “But I promise to do better in the future.”

Hey yo, I’m just like my country,
I’m young, scrappy and hungry,
And I’m not throwing away my shot. https://t.co/Sp8KMgc68q