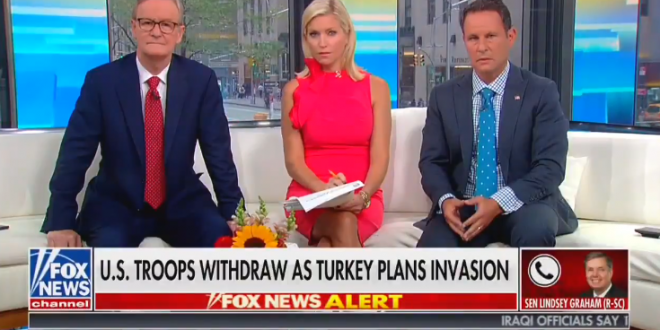 One of President Donald Trump’s most reliable defenders in the Senate blasted him Monday morning over his “shortsighted and irresponsible” decision to withdraw U.S. troops from Northern Syria — paving the way for a Turkish military operation.  Appearing on Fox & Friends, a program which long been on a shortlist of the president’s favorites, Sen. Lindsey Graham (R-SC) buried Trump’s decision to pullout of Syria.

“Absolutely not,” Graham said — when asked if he could support the move. “If I didn’t see Donald Trump’s name on the tweet, I thought it would be [former President Barack] Obama’s rationale for getting out of Iraq. … This is gonna lead to ISIS’ reemergence” The senator added, “So this is a big win for Iran and [Syrian president Bashar Al-] Assad. A big win for ISIS.” And after the segment, Graham continued going after the president on Twitter.

I don’t know all the details regarding President Trump’s decision in northern Syria. In process of setting up phone call with Secretary Pompeo.

If press reports are accurate this is a disaster in the making.

* Ensures ISIS comeback.
* Forces Kurds to align with Assad and Iran.
* Destroys Turkey’s relationship with U.S. Congress.
* Will be a stain on America’s honor for abandoning the Kurds.

Also, if this plan goes forward will introduce Senate resolution opposing and asking for reversal of this decision. Expect it will receive strong bipartisan support.

Just spoke to Sen @ChrisVanHollen about situation in Syria.

We will introduce bipartisan sanctions against Turkey if they invade Syria and will call for their suspension from NATO if they attack Kurdish forces who assisted the U.S. in the destruction of the ISIS Caliphate.

“I hope I’m making myself clear how shortsighted & irresponsible this decision is in my view,” he says. “This to me is just unnerving to its core.” pic.twitter.com/URH0DVA1bo