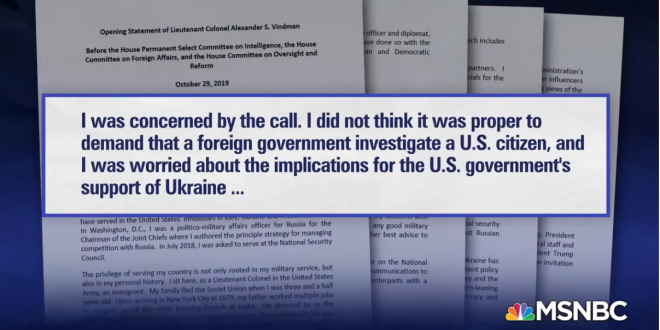 A White House national security official who is a decorated Iraq war veteran plans to tell House impeachment investigators on Tuesday that he heard President Trump appeal to Ukraine’s president to investigate one of his leading political rivals, a request the aide considered so damaging to American interests that he reported it to a superior.

Lt. Col. Alexander S. Vindman of the Army, the top Ukraine expert on the National Security Council, twice registered internal objections about how Mr. Trump and his inner circle were treating Ukraine, out of what he called a “sense of duty,” he plans to tell the inquiry, according to a draft of his opening statement obtained by The New York Times.

He will be the first White House official to testify who listened in on the July 25 telephone call between Mr. Trump and President Volodymyr Zelensky of Ukraine that is at the center of the impeachment inquiry, in which Mr. Trump asked Mr. Zelensky to investigate former Vice President Joseph R. Biden Jr.

At the direction of his superiors at the NSC, including John R. Bolton, Colonel Vindman drafted a memorandum in mid-August that sought to restart security aid that was being withheld from Ukraine, but Mr. Trump refused to sign it…https://t.co/sW5229q4qi

Seriously? Wow. So shameful. Vindman is a patriot, who has served his country with honor both on and off the battlefield. He was a first rate officer at the embassy, one of the best on the team. https://t.co/IN1P5P0BLO

Read @SherylNYT on the remarkable backstory of Vindman, the latest star impeachment witness, who fled to the US from Ukraine at age 3, earned a Purple Heart in Iraq & a Harvard master’s, & now works at the WH across the hall from his twin brother https://t.co/xhGUUKhx26