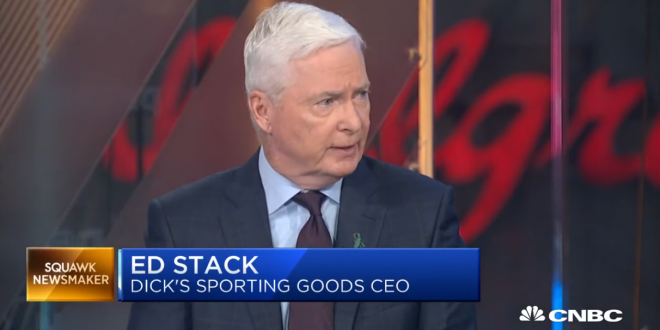 Ed Stack, the CEO of Dick’s Sporting Goods and a longtime Republican donor, is testing the waters for a possible third-party presidential bid that could scramble the dynamics of the 2020 general election. Various messages were presented to a focus group in southern Wisconsin this week centering on the billionaire businessman, along with possible three-way match-ups against Donald Trump and Joe Biden or Elizabeth Warren.

The focus group, according to a source who took part in the testing, ran through varying themes involving Stack and heavily focused on his example of “showing leadership” by halting the sale of assault-style rifles at all of Dick’s Sporting Goods stores in the wake of the high school massacre in Parkland, Florida.

The prospect of a well-funded, third-party candidate could have a significant impact in a race where Trump is expected to be unable to win a majority of the vote. In 2016, Trump won just 46% against Hillary Clinton and has consistently hovered below 50% in national polls.