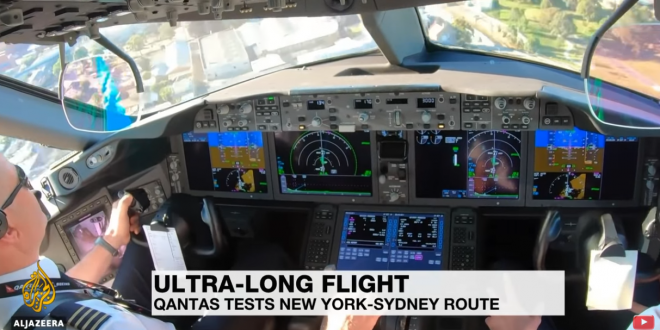 Australian airline Qantas has completed the longest non-stop commercial passenger flight, researching the potential impacts of ultra-long haul flights on pilots, crew and passengers. With 49 people on board, the Boeing 787-9 Dreamliner flight completed the 10,066-mile journey from New York to Sydney in 19 hours and 16 minutes. Cameras were mounted in the cockpit to record pilot alertness.

Research into the health and well-being of those on board were conducted during the flight with tests ranging from monitoring pilot brain waves, melatonin levels and alertness to exercise classes for passengers. Qantas has said it hopes to operate direct flights from three cities on Australia’s east coast — Sydney, Melbourne and Brisbane — and New York and London by 2022 or 2023.

Previous Pompeo: I Never Saw Any Quid Pro Quo With Ukraine
Next Facebook Takes Down Trump Ad For Using Profanity