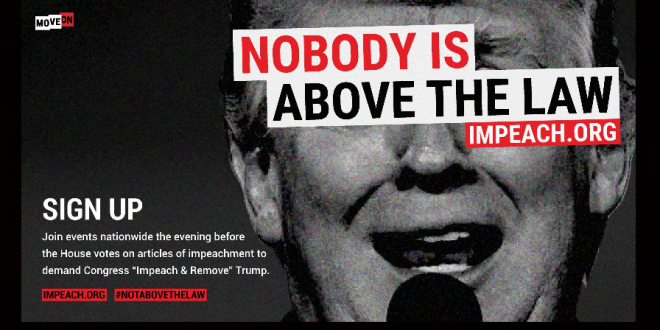 A coalition of progressive advocacy groups on Friday announced plans for a “historic nationwide mobilization” across the U.S. on the eve of the House’s yet-to-be-scheduled vote on articles of impeachment against President Donald Trump.

Hundreds of thousands of people are expected to take to the streets around the country, said the “Nobody Is Above the Law” coalition, which includes MoveOn, Public Citizen, Indivisible, and Stand Up America, as well as more than a dozen other organizations.

Nearly 120 events have already been planned in more than 80 cities in anticipation of the House impeachment vote.

Where will you be the evening before the House impeaches Donald Trump? #NotAboveTheLaw

When the House votes on articles of impeachment, we’re going to show up around the country to drive a message that Americans believe nobody is above the law. Sign up at https://t.co/LwdnwBt17A pic.twitter.com/A8ErAWzPZ6

Previous Harris Hits Back At Trump: The Only Part Of Criminal Justice You Can Claim Credit For Is The “Criminal” Part
Next Russian Spy Gets Hero’s Welcome After Deportation