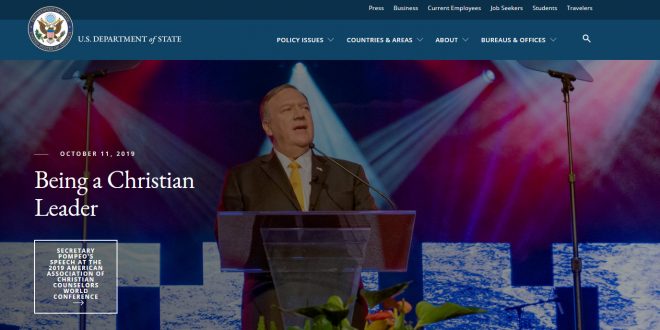 Secretary of State Mike Pompeo delivered a speech on Friday to the American Association of Christian Counselors (AACC) at its 2019 world conference in Nashville, Tennessee. Outlining “what it means to be a Christian leader,” Pompeo described how he applies his religious faith to government administration.

Titled “Being a Christian Leader” and promoted in his official government capacity on the homepage for the State Department, religious and civil liberties organizations have decried it as a potential violation of the U.S. Constitution’s intended separation of church and state.

According to both religious and atheist organizations, Pompeo is welcome to his Christian faith, but in potential violation of the separation of church and state by promoting “Being a Christian Leader” in official capacities, such as the State Department home page.

Grateful that my call as a Christian to protect human dignity overlaps with America’s centuries-old commitment to the same in our foreign policy. Dedicated to ensuring our diplomacy pursues this mission and guards our proud history of honoring and defending #religiousfreedom. pic.twitter.com/IZLFY3ECeY

We are deeply troubled by Secretary of State Mike Pompeo’s advancement of Christian leadership in a speech on Saturday and the subsequent promotion of that speech on the homepage of the official website of the Department of State. Read more here: https://t.co/DArQ9DAgr2

Separation of church and state? At the State Department, not so much. https://t.co/NrnevESVLp #MikePompeo