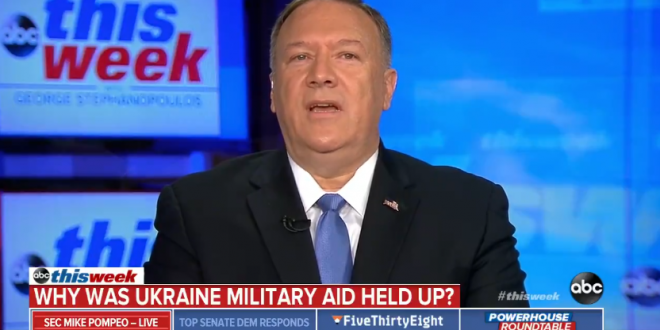 Pompeo: I Never Saw Any Quid Pro Quo With Ukraine

Secretary of State Mike Pompeo said he never saw the kind of quid pro quo that acting White House Chief of Staff Mick Mulvaney referred to on Thursday with regard to the decision-making process he was involved in.

“The conversation was always around what were the strategic implications,” Pompeo said on ABC’s “This Week” on Sunday. “Would that money get to the right place or would there be corruption in Ukraine and the money wouldn’t flow to the mission that it was intended for.”

After repeated denials by the administration — including by the president himself — Mulvaney said during a briefing on Thursday that there was a quid pro quo in the Ukraine affair. He has since walked back those comments, writing in a statement that the press has “decided to misconstrue” his earlier comments.

.@GStephanopoulos on suspending aid: “You saw Mr. Mulvaney right there say that one of the reasons was indeed this idea that Ukraine had to pursue these political investigations.”

Pompeo: “I’ll leave to the chief of staff to explain what it is he said” https://t.co/U9kwy49CzI pic.twitter.com/uaH4MWQigc