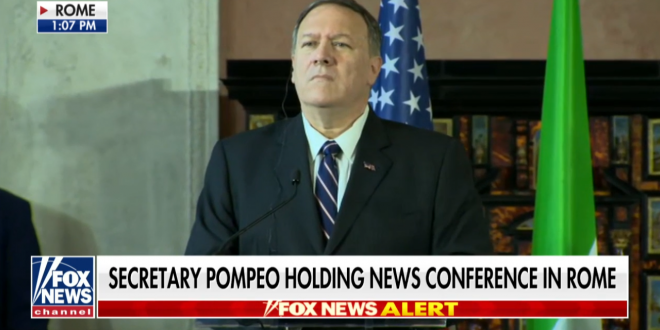 Pompeo Confirms He Was On Ukraine Call [VIDEO]

Addressing reporters in Rome during an overseas visit, Secretary of State Mike Pompeo confirmed that he was on the July call between President Trump and Ukrainian President Volodymyr Zelesnky.

“I was on the phone call,” he told the press. “I know precisely what the American policy has been with respect to Ukraine. It’s been remarkably consistent, and we will continue to drive those sets of outcomes,” he added.

The secretary neglected to answer questions on whether or not he had heard anything on the call that had raised any red flags, but said the call was about helping Ukraine get corruption of their government and “taking down the threat that Russia poses to Ukraine.”

Secretary of State Pompeo confirms he was listening to Trump’s July 25th phone call with the president of Ukraine: “I was on the phone call.”
Via CNN pic.twitter.com/E7OkOQmtGx

“I was on the phone call,” Pompeo said.
Pompeo was asked if he heard anything on the call that gave him any concerns or raised a red flag.
“I know precisely what the American policy is with respect to Ukraine. It’s been remarkably consistent.” https://t.co/BRLQo7gXgo

U.S. Secretary of State Mike Pompeo confirms that he was on the July 25 telephone call between President Trump and the Ukrainian president. Pompeo did not give information about the contents of the call that is the subject of an impeachment inquiry. https://t.co/50qogB5gvq

Breaking — Mike Pompeo admits he was on the call when President Trump asked Ukraine for help investigating his political enemies. https://t.co/dETQFYyd7B