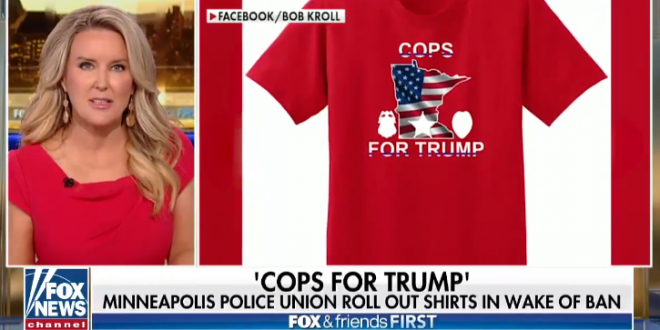 The Minneapolis police union has come out with a “Cops for Trump” T-shirt, just days after the Police Department banned officers from wearing their uniforms in support of candidates at political events or in ads.

Lt. Bob Kroll, head of the officers’ union, posted the T-shirt image on his personal Facebook page, saying the shirts will be for sale starting Monday at the union’s headquarters for $20 each and will soon be available online.

The shirt has stars and stripes in the shape of Minnesota along with three different law enforcement badges. Last week, Kroll accused the Police Department of instituting its new policy just before President Donald Trump’s visit to Minneapolis.

Previous Trump Defiant On Syria: The US Only “Fights To Win”
Next Fox Reporter: Trump’s “Treason” Claims Are Just Trolling