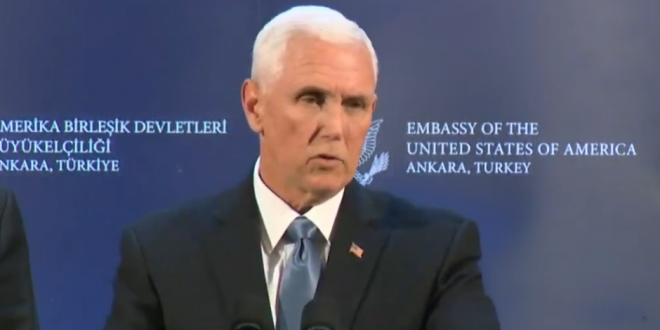 Turkey has agreed to a ceasefire in northern Syria between its forces and their allied rebels and U.S.-backed Syrian Kurds, Vice President Mike Pence announced. Pence met with Turkish President Recep Tayyip Erdogan Thursday to push for a ceasefire.

Erdogan had repeatedly rejected the idea, saying his government would not negotiate with what it considers a terrorist organization.

The high-level diplomacy comes one day after President Donald Trump dismissed concerns about the violent clashes: “That’s between Turkey and Syria, it’s not between Turkey and the United States, like a lot of stupid people would like us to, would like you to believe,” he said in the Oval Office Wednesday.

There was visible tension between U.S. Vice President Pence and Turkish President Erdogan when they met in Turkey today to discuss the situation in northern Syria pic.twitter.com/6wN436SxTP

BREAKING: Vice Pres. Mike Pence: “Today, the United States and Turkey have agreed to a ceasefire in Syria.” https://t.co/o4UjO7BtjE pic.twitter.com/XgNgxbGqlG

BREAKING — Erdogan and Pence reach a deal to suspend Turkish incursion in Northern Syria in 120 hours, Turkish sources to @MiddleEastEye

Pence: “Turkey and the USA have agreed on a ceasefire in Syria. It will be a pause in military operations for 120 hours.”

Great news out of Turkey. News Conference shortly with @VP and @SecPompeo. Thank you to @RTErdogan. Millions of lives will be saved!

This deal could NEVER have been made 3 days ago. There needed to be some “tough” love in order to get it done. Great for everybody. Proud of all!