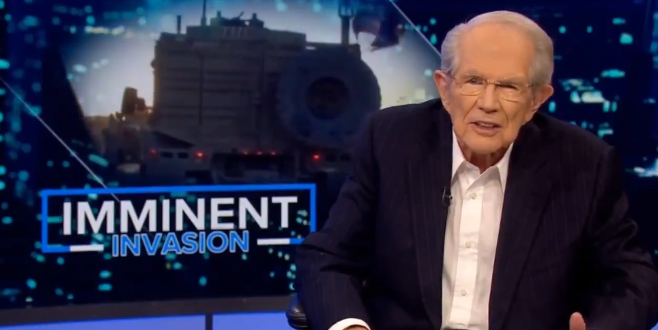 Pat Robertson Warns: Trump Will “Lose The Mandate Of Heaven” If He Betrays Our Allies In Syria [VIDEO]

“Ladies and gentlemen, I want to say right now that I’m absolutely appalled that the United States is going to betray those democratic forces in northern Syria. That we’re possibly going to allow the Turks to come in against the Kurds. Edogan is a thug. He has taken control of his country as a dictator. To say he is an ally of America is nonsense. He is in it for himself.

“And the president, who allowed Khashoggi to be cut in pieces without any repercussions whatsoever, is now allowing the Christians and the Kurds to be massacred by the Turks. Now I believe, and I want to say this with great solemnity, the president of the United States is in danger of losing the mandate of heaven if he permits this to happen.” – Pat Robertson, on today’s 700 Club.

Pat Robertson is “appalled” by Trump’s decision to withdraw U.S. troops from northern Syria: “The President of the United States is in great danger of losing the mandate of Heaven if he permits this to happen.” pic.twitter.com/YGeNYpbGrF

Previous McConnell Joins GOP Outrage Over Trump’s Syria Move
Next Giuliani: I’m Sure I Can Totally Sue House Democrats Because I Got The Highest Grade In Constitutional Law