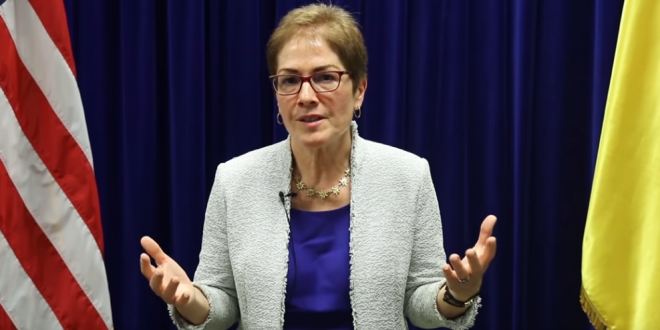 Marie L. Yovanovitch, who was recalled as the American ambassador to Ukraine, testified to impeachment investigators on Friday that a top State Department official told her that President Trump had pushed for her removal for months even though the department believed she had “done nothing wrong.”

In a closed-door deposition that could further fuel calls for Mr. Trump’s impeachment, Ms. Yovanovitch delivered a scathing indictment of his administration’s conduct of foreign policy. She warned that private influence and personal gain have usurped diplomats’ judgment, threatening to undermine the nation’s interests and drive talented professionals out of public service.

According to a copy of her opening statement obtained by The New York Times, the longtime diplomat said she was “incredulous” that she was removed as ambassador “based, as far as I can tell, on unfounded and false claims by people with clearly questionable motives.”

In explaining her departure, she acknowledged months of criticisms by Trump’s personal attorney Rudolph W. Giuliani, who had accused her of privately badmouthing the president and seeking to protect the interests of former vice president Joe Biden and his son who served on the board of Ukrainian energy company.

“Contacts of Mr. Giuliani may well have believed that their personal financial ambitions were stymied by our anti-corruption policy in Ukraine,” she said. She arrived on Capitol Hill on Friday despite the White House’s stated objections and refusal to cooperate with the Democrat-led proceedings.

Breaking News: Marie Yovanovitch, the recalled U.S. ambassador to Ukraine, told Congress in scathing testimony that President Trump pushed to have her removed based on “false claims” and warned that private influences are undermining the nation’s interestshttps://t.co/RFxhJxEzYO

Yovanovitch says State extended her tenure to 2020 until she was “abruptly told in late April to come back to Washington from Ukraine ‘on the next plane.’”

Yovanovitch on GIULIANI: “I do not know Mr. Giuliani’s motives for attacking me. But individuals who have been named in the press as contacts of Mr. Giuliani may well have believed that their personal financial ambitions were stymied by our anti-corruption policy in Ukraine.” https://t.co/YoXfem3vky

Previous Right Wing Activist Dennis Prager: Young Men Grow Beards Because The Left Has “Crapped On Masculinity”
Next Sebastian Gorka: You Owe It To Trump To Spend The Next Full Year Trolling Liberals On Social Media [VIDEO]