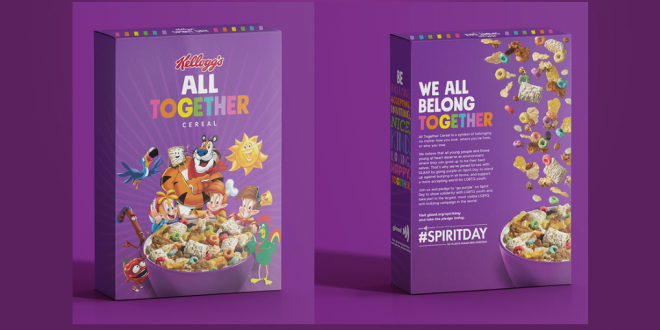 One Million Moms Vs Kellogg’s All Together Cereal

Kellogg’s has supported the homosexual community for a long time, and now it is obvious they are going after our children. As part of an effort to say “we’re all in this together,” Kellogg’s has combined several of its popular cereals into one package to support an LGBTQ “anti-bullying” campaign called Spirit Day.

Kellogg’s calls it All Together Cereal, an exclusive, limited-time offer in which the cereal brand’s famous mascots are promoting their individual cereals packaged together in a purple box with rainbow colors. Purple is the designated color for Spirit Day, which is described by the Gay & Lesbian Alliance Against Defamation (GLAAD) as “the most visible anti-LGBTQ bullying campaign and united show of support for LGBTQ youth.”

The cereal box reads: “We all belong together. All Together Cereal is a symbol of acceptance no matter how you look, where you’re from, or who you love. We believe that all people deserve an environment where they can be their best selves. That’s why we’ve joined forces with GLAAD for Spirit Day to stand up against bullying and to support a more accepting world for LGBTQ people.”

Kellogg’s goal is to normalize the LGBTQ lifestyle by using cereal mascots to brainwash children. The company is also donating $50,000 to GLAAD to support its anti-bullying and LGBTQ advocacy work.

TAKE ACTION: Kellogg’s needs to hear from you. Supporting the homosexual agenda verses remaining neutral in the cultural war is just bad business. If Christians cannot find corporate neutrality with Kellogg’s, then they will vote with their pocketbook and support companies that are neutral. Sign our petition now!

We are not "All together," as the LGBTQ lifestyle/worldview is anti-God, anti-biblical & anti-science and consists of only a small minority in the culture. But many will "All Together" not support such in your face anti-Christian marketing! https://t.co/Gb9B0MldV2