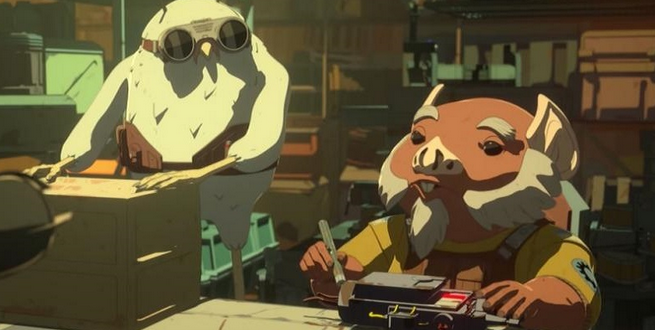 WARNING! Disney proudly admits there is a gay couple in the animated children’s series Star Wars Resistance. While such news is not shocking coming from Disney, it is extremely disappointing, and the inclusion of a gay couple is completely unnecessary. When Disney executive producer Justin Ridge was asked about the link between Okra and Flix, the two suspected gay characters, he said, “I think it’s safe to say they’re an item. They’re absolutely a gay couple, and we’re proud of that.”

As the series approaches the October 6 premiere of its second and final season, it is disheartening to know that the Star Wars Resistance series was nominated for an Emmy this year for outstanding children’s program since the inclusion of the gay couple makes the show far from family friendly.

It is obvious where Disney stands on homosexuality. Disney’s first gay kiss aired in 2017 on Disney XD’s animated series Star vs. the Forces of Evil. The company included a teenage gay couple on Disney Channel’s Andi Mack and highly publicized a romantic look between two men dancing together at the end of the 2017 live-action remake of Beauty and the Beast. Disney has also included characters who have two mothers on both Good Luck Charlie and Disney Jr.’s Doc McStuffins.

By choosing to abandon family friendly entertainment, Disney’s move toward more adult fare may ultimately prove to be a huge mistake. The Disney Channel is deliberately choosing to promote sinful adult content to children, while the entire Disney media empire is sacrificing children’s innocence. 1MM disapproves and will continue to warn parents about Disney’s liberal agenda.

Disney has decided to be politically correct instead of providing family friendly entertainment. Disney should stick to entertaining instead of pushing an agenda. Conservative families need to urge Disney to avoid mature and controversial topics such as homosexuality.

TAKE ACTION: Sign the Disney pledge stating you will no longer support Disney as long as they veer away from family friendly entertainment. And please share with your friends and family.