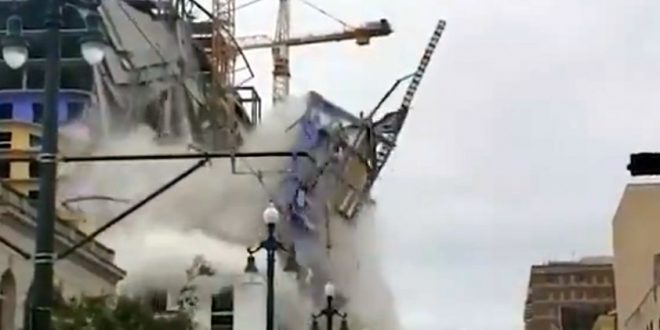 One person is dead and three are still missing after part of the Hard Rock hotel under construction in downtown New Orleans collapsed Saturday morning with what witnesses described as a rumble and giant cloud of dust. Multiple injuries have been reported, authorities said. One worker said about 45 people were working inside the building.

Authorities said 18 people had been transported to the area hospitals. They were reported in stable condition. There are no reports of anyone on the street being injured. Authorities were evacuating buildings in a square roughly bounded by Bienville Street, Basin Street, Canal Street and Burgundy.

In an 11:20 a.m. news conference near the scene, New Orleans Fire Department Superintendent Tim McConnell said the upper six to eight floors of the structure collapsed and that the building remains very unstable. “The building is unstable, so a collapse is still possible,” McConnell told reporters.

A rescue mission is happening at the collapsed Hard Rock Hotel New Orleans, and officials are evacuating buildings.

An urban search-and-rescue team is sweeping the building for three missing workers despite fear of an additional crane collapse.

As the under-construction Hard Rock Hotel in New Orleans collapsed, vehicles and a streetcar dodged debris falling down from the construction site as captured from inside a streetcar.

Previous CALIFORNIA: New Gun Law Allows Teachers To Ask That Guns To Be Taken Away From “Dangerous” People
Next Pat Robertson: The Death Penalty Is Absolutely Biblical