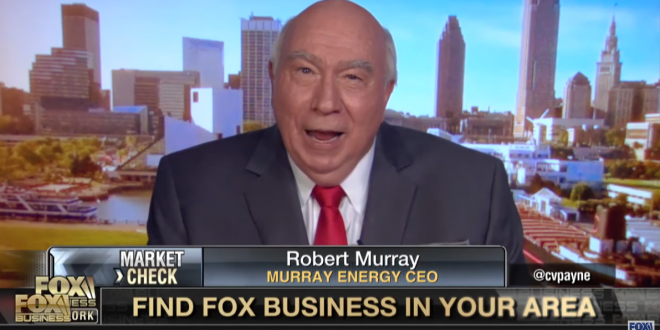 Murray Energy Corp., the U.S. coal giant that had pressed the Trump administration for help, has filed for bankruptcy.

The largest closely held coal miner in America failed to make multiple payments to lenders this month, prompting a deal with creditors that will see them make a “stalking horse” bid under Chapter 11 bankruptcy to exchange the company’s debt for its assets, the company announced Tuesday morning in a press release.

Murray Energy is the fifth major U.S. coal company to declare bankruptcy this year, as cheap natural gas and renewable energy resources cut into coal’s share of the U.S. power market. Coal once accounted for more than half of all U.S. power generation. Today, it’s less than 25%.

BREAKING: Murray Energy, the largest private coal company in the US, filed for a Chapter 11 bankruptcy reorganization today.

The Trumpiest coal baron just declared bankruptcy. It’s sort of funny and sort of awesome except that he’ll just screw his workers and loot his failed company like all the others. https://t.co/krDZr0nqb6 via @taykuy

“As the company neared bankruptcy, the price for some of its bonds tumbled to the point of being nearly worthless, reflecting the coal industry’s dimming prospects as the U.S. turns to abundant natural gas and renewable sources such as solar and wind.”https://t.co/ROZfbtdhmO