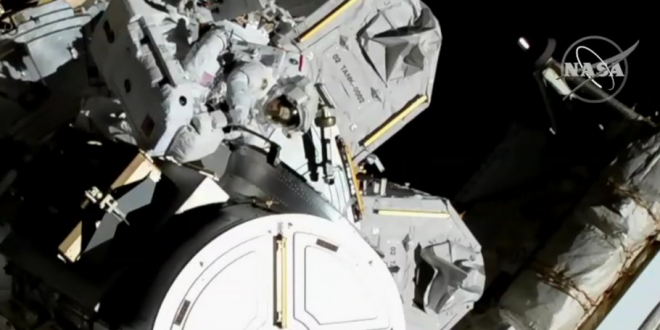 NASA made history Friday morning when astronauts Christina Koch and Jessica Meir stepped outside the International Space Station to replace a faulty battery charger. The all-female spacewalk — the first of its kind “in human history,” the agency said — began at 7:38 a.m. Eastern time as the two American astronauts set their suits to battery power mode.

Koch was first to venture out of the ISS with a red tether attached to her suit. Meir soon followed, carrying a tool bag as she made her way out of the hatch at 7:49 a.m.

The historic float outside the orbiting laboratory into the vacuum of space came several months after another all-female spacewalk was canceled because NASA did not have enough spacesuits in the right size. And it’s being heralded as a huge step forward for the agency at a time when NASA continues to work to highlight the contributions of women.

The clip below is currently live.

Our #AllWomanSpacewalk is happening today!

Tune in to https://t.co/mzKW5uV4hS to watch @Astro_Christina & @Astro_Jessica embark on their venture to replace a failed power controller:
📺 6:30am ET – Coverage begins
👩🏻‍🚀 7:50am ET – Our @NASA_Astronauts exit the @Space_Station pic.twitter.com/LUUDIH8g0v