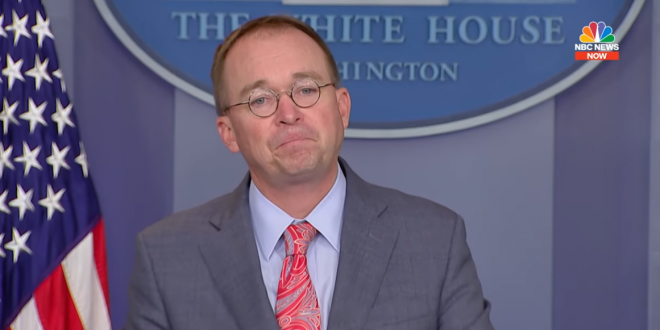 Mick Mulvaney, the acting White House chief of staff, told reporters that the release of military aid to Ukraine this summer was linked in part to White House demands that Ukraine’s government investigate what he called corruption by Democrats in the 2016 American presidential campaign.

It was the first time a White House official has publicly acknowledged what a parade of current and former administration officials have told impeachment investigators on Capitol Hill.

“The look-back to what happened in 2016 certainly was part of the thing that he was worried about in corruption with that nation,” Mr. Mulvaney told reporters, referring to Mr. Trump. “And that is absolutely appropriate.”

So Mulvaney has admitted:

2. They did have, in fact, a quid pro quo with Ukraine for investigations into the DNC server

Mulvaney just straight up admitted that they withheld Ukraine aid for investigations into what happened in 2016 there.

Trump’s Acting Director of the Office of Management and Budget Mick Mulvaney just openly admitted that Trump’s withholding of aid to Ukraine in exchange for an investigation into Democratic National Committee’s servers was a quid pro quo. That’s damning. pic.twitter.com/HVQmad1JWL

!!!: WH Chief of Staff Mulvaney says Ukraine aid was tied to Trump’s desire for investigation. When reporter noted his explanation sounds like a quid-pro-quo, Mulvaney said: “We do that all the time with foreign policy.”

Journos: don’t soft pedal was Mulvaney just said. They froze weapons aid to Ukraine until they agreed to get on board the Seth Rich/Crowdstrike server conspiracy theory. Why not just demand the Kurds invade Comet Ping Pong. We’re in freefall here.

Mulvaney is admitting the the US was withholding aid to Ukraine because they wanted an investigation into the “corrupt DNC server.”

This is 100% a conspiracy theory.https://t.co/wRkkm7tkQM