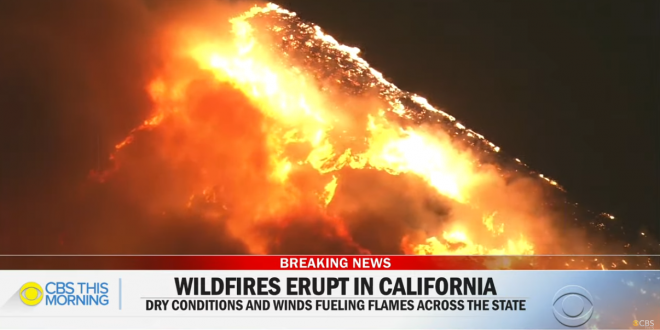 In the earlier blaze Thursday, 74 structures were destroyed and 16 others were damaged in Calimesa in Riverside County, about 70 miles east of Los Angeles, officials said.

Hours later, the fire in Los Angeles started in Sylmar in the San Fernando Valley north of downtown. The Los Angeles Fire Department said the so-called Saddleridge Brush Fire grew from 60 acres to over 4,000 acres.

Flames from the Saddleridge Fire, which started about 9 p.m. Thursday, crossed over the 210 Freeway and later the 5 Freeway. Both highways were closed because of smoke. Interstate 405 was closed at State Road 118.

By 4 a.m. local time Friday, the fire had spread to more than 7 square miles in the northern foothills of the San Fernando Valley, according to the Associated Press.

Officials ordered mandatory evacuations for 12,700 homes in the Porter Ranch, Granada Hills and Oakridge Estates neighborhoods. Some residents had already gone to bed before the order to flee came.