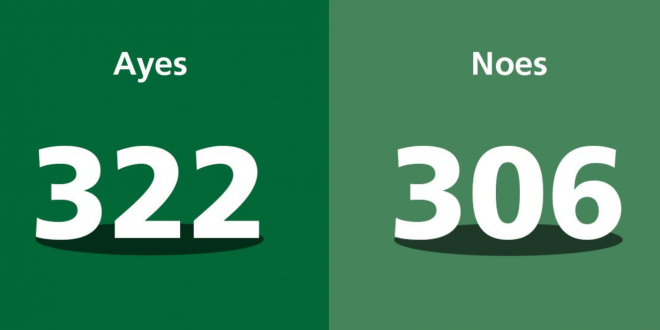 Just as Britain appeared on the cusp of a history-making, up-or-down vote on its long-delayed departure from the European Union, the British Parliament struck an impasse on Saturday as lawmakers adopted a measure that delayed a vote on Prime Minister Boris Johnson’s Brexit deal with Brussels.

The turbulent events left Mr. Johnson’s agreement in limbo, legally obliging him to seek yet another extension for Britain’s departure, which he had once vowed never to do. It was the latest twist in a debate that has convulsed the country ever since the British public voted in 2016 for a divorce from the European Union.

On a dramatic day in which lawmakers debated while enormous crowds of anti-Brexit protesters marched outside the Houses of Parliament, Mr. Johnson implored lawmakers to approve his agreement, which would pave the way for Britain to leave the European Union at the end of the month.

BREAKING: Government forced to seek an extension after losing the Letwin amendment vote. The DUP voted against the government.

This puts today’s #BrexitVote on the Brexit deal in jeopardy.

MPs have decided by 322 votes to 306 to amend the Government’s approval motion.
#BrexitVote pic.twitter.com/4b0y3rF71F

BREAKING – Letwin amendment wins by a majority of 16.

This means that Boris Johnson does not have and cannot claim
the support of Parliament
for his hard #Brexit proposals.#PeoplesVoteMarch #FinalSay pic.twitter.com/SeThpVcLAO