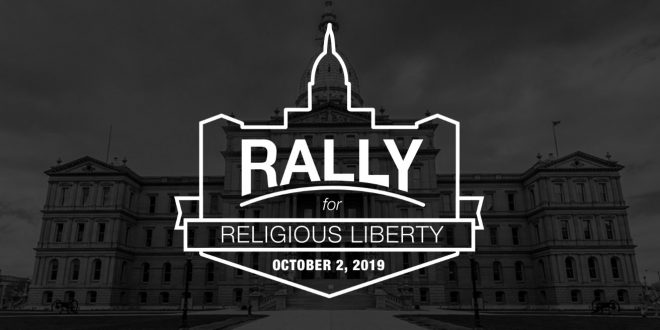 MICHIGAN: Christian Group To Hold Rally At Capitol Against The “Dangerous Perversion Of Homosexuality”

Federal courts overturned Michigan Attorney General Dana Nessel’s decision against the St. Vincent Catholic Charities adoption agency in Michigan on Friday citing “a targeted attack on a sincerely held religious belief.” The Bible Nation Society and others are holding a Religious Liberty Rally at the Lansing Capitol steps on Wednesday, October 2nd at 10am to celebrate Nessel’s defeat and promote the first amendment right to the freedom of conscience in Michigan.

“Hate crimes lists and legislation are an attempt by homosexual advocacy groups to silence Christian opposition and gain the acceptance of a dangerous perversion that threatens both the Constitution and moral civility.”, said Doug Levesque of the Bible Nation Society. “Despite detractors trying to derail free speech and the religious liberty aspects of this particular rally, we will be standing up and speaking out against all threats to the first amendment.”

If the name Doug Levesque rings a bell, that could be from his 2010 declaration that Barack Obama is a secretly homosexual, Kenya-born, drug user.

And possibly the Antichrist.

Last year he ran for the Michigan state Board of Education on a platform of fighting “aberrant sexuality” in public schools, finishing 11th out of eleven candidates.