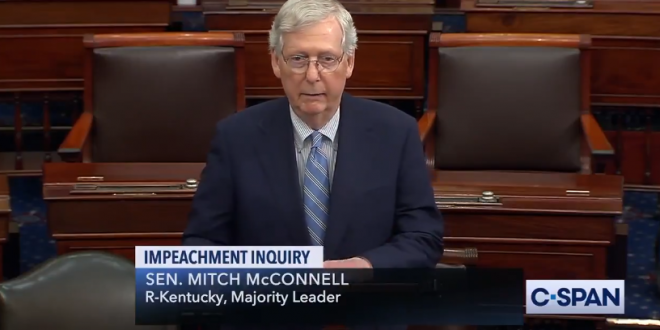 Senate Majority Leader Mitch McConnell (R-Ky.) teed off against the House impeachment inquiry on Tuesday, marking his first comments since Congress returned from its two-week break.

“House Democrats are finally indulging in their impeachment obsession. Full steam ahead,” McConnell said during a speech from the Senate floor, adding that House Speaker Nancy Pelosi (D-Calif.) had “crumbled” to the “left-wing impeachment caucus.”

“I don’t think many of us were expecting to witness a clinic in terms of fairness or due process. But even by their own partisan standards, House Democrats have already found new ways to lower the bar,” McConnell added.

.@senatemajldr on Impeachment Inquiry: “House Democrats have wasted no time throwing fairness and precedent to the wind.”

I remember this quote, Mitch Sep 25, 2012 – He said, his number-one goal was to make sure that Barack Obama was a one-term president. a 1-term president,”’ says Rendell Blocker Mitch- Garland didn’t even get hearing Now blocking 200 bills House Passed FAIR IS THAT FAIR Mitch?