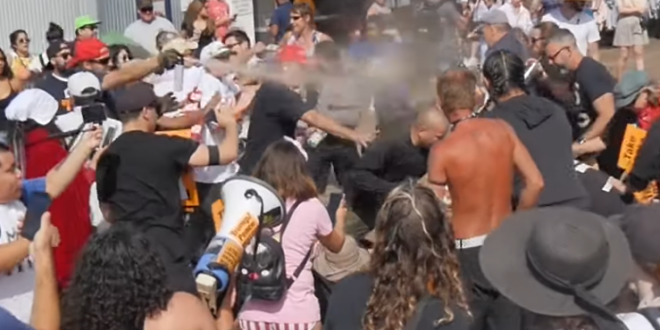 Police in California say a man sprayed other people with bear repellent at an event on Saturday afternoon at the Santa Monica Pier. Video purportedly of the event shows a man in a red “Make America Great Again” hat using a spray at the confrontation.

At least one witness at the incident described this as “pepper spray.” Santa Monica police Sgt. D. Hicks declined to identify the defendant by name to the Times, saying he wasn’t authorized to do so.

He did describe him as a 33-year-old local with a “fairly extensive” criminal history. The defendant was being held Sunday on suspicion of violating the terms of parole, Hicks said. This prior conviction was a weapons case, according to police.