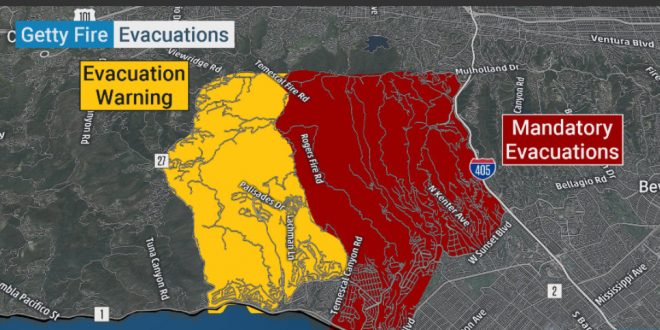 A growing brush fire was threatening thousands of homes in Brentwood and other Westside hillside communities, burning several homes and prompting widespread evacuations early Monday. The Getty fire broke out shortly before 2 a.m. along the 405 Freeway near the Getty Center and spread to the south and west, rapidly burning more than 500 acres and sending people fleeing from their homes in the dark. About 10,000 structures were under mandatory evacuation orders.

The mandatory evacuation zone was described by fire officials as a box: Mulholland Drive on the north side, the 405 on the east, Sunset Boulevard on the south and Temescal Canyon Road on the west. “We have homes that we believe are lost,” Mayor Eric Garcetti told reporters. He urged residents to leave if they’re under mandatory evacuation orders, saying some residents had only 15 minutes to flee. “Get out when we say get out,” he said, urging homeowners to not try to fight the fire with garden hoses.

Video at the bottom is live.

Stay away from the 405!!! I could feel the heat from inside my car. 🥵 #GettyFire pic.twitter.com/Usb36BdXlY

Man these LA 🔥 aren’t no joke. Had to emergency evacuate my house and I’ve been driving around with my family trying to get rooms. No luck so far! 🤦🏾‍♂️