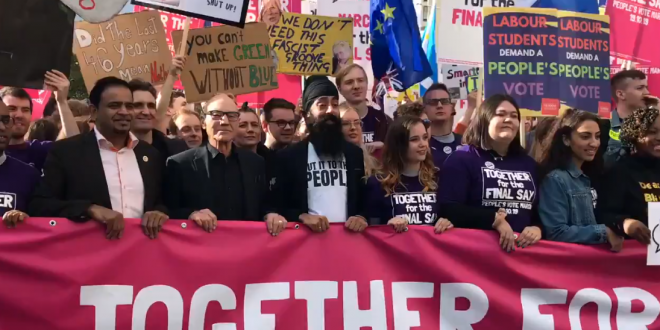 Hundreds of thousands of people have descended on London to demand a final say on Britain’s exit from the European Union.

Huge numbers are marching through the capital as part of the People’s Vote demonstration, which is taking place as MPs sit for the first Saturday since the Falklands War to decide the fate of Brexit.

Protesters gathered in Green Park and Hyde Park, adorned in EU flags, beret and carrying placards, before moving to Park Lane, where the march began. The crowd will hear speeches from politicians and celebrities who support a confirmatory vote on any EU withdrawal agreement.

The clips below are live at this writing.

The #PeoplesVoteMarch gets on its way from Park Lane. Youth campaigners joined by Sir Patrick Stewart, and the London Mayor Sadiq Khan @LBC pic.twitter.com/zRO2AUPf4V

MUST-WATCH: This is the absolutely incredible footage of today’s #PeoplesVoteMarch – still plenty of people on Park Lane, despite the front of the march setting off about 40 minutes ago.

MPs take note that the million+ who are at today’s #PeoplesVoteMarch are VOTERS.
We are your constituents.
We are the voice of the people.
We are British, we are European, we are citizens of the world.
We will never forget & never forgive.
Today we demand representation. pic.twitter.com/PdaOfDoU9H

Front of the #PeoplesVoteMarch pic.twitter.com/xvcvVwwv7p

As a restaurant critic I endorse this placard. #PeoplesVoteMarch pic.twitter.com/bFrzCwoqVe

I have eaten two croissants for breakfast before heading out to the #PeoplesVoteMarch. Like the elite gastronomic traitor I am 😉

I can’t march with you in person today. One day I will tell you why exactly, but in the meantime I want to march with you in spirit. And I want to do so as a proud foreign c❤️nt. Why? Because it’s what Brexiters have called me well over 2,000 times since 2016. #PeoplesVoteMarch pic.twitter.com/RkGND9pe6g

People are here for our LGBT+ rally before the #PeoplesVoteMarch – we’re excited to start soon pic.twitter.com/9JEvUmHSFK