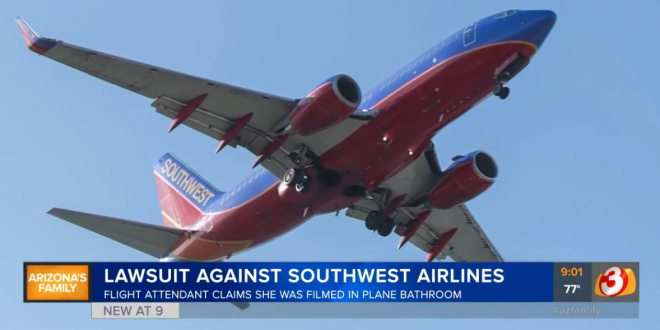 A Phoenix-based Southwest Airlines flight attendant has sued the airline, accusing the Dallas-based carrier of retaliation after she reported spotting two pilots livestreaming video from the lavatory to an iPad in the cockpit on one of her flights. Renee Steinaker was working as a flight attendant on Flight 1088 between Pittsburgh and Phoenix.

The suit alleges that 2½ hours into the flight, the pilot, Capt. Terry Graham, asked Steinaker to come to the cockpit so that he could leave to use the restroom. Southwest Airlines policy requires two crew members in the cockpit at all times, so Steinaker was asked to staff the cockpit with co-pilot Ryan Russell in Graham’s absence.

The suit states that when Steinaker entered the cockpit, she spotted an iPad mounted to the windshield to the left of the captain’s seat. On it, she reportedly could see a live stream of what appeared to be Graham in the bathroom.

The captain’s co-pilot, Ryan Russell, panicked when he realized she noticed the device, the report said. Russell claimed it was part of a new security measure featured on all Southwest flights, but the flight attendant wasn’t fooled.

Steinaker snapped a photo of the iPad and alerted her superiors when the plane landed, according to the report. “The safety and security of our employees and customers is Southwest’s uncompromising priority.

“As such, Southwest does not place cameras in the lavatories of our aircraft. At this time, we have no other comment on the pending litigation,” the airline said in a statement.

According to the first linked report, upon landing the pilots illegally fled the aircraft, leaving behind a loaded handgun. They continue to fly for Southwest today.

Previous CALIFORNIA: Wildfire Blackouts To Affect Two Million
Next John Kelly: I Warned Trump He’d End Up Impeached If He Replaced Me With Another One Of His “Yes Men”