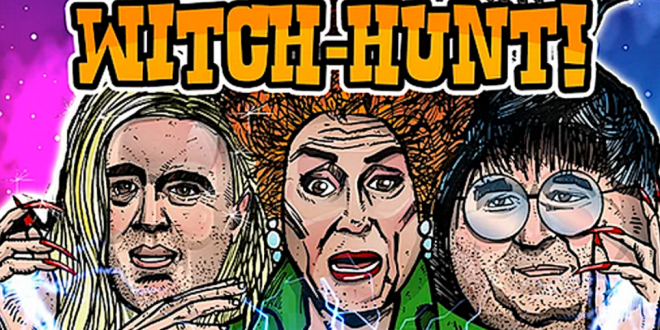 The Trump 2020 campaign is hawking a “Stop the Witch-Hunt” poster parodying the 1993 film Hocus Pocus just before Halloween. The Trump Make America Great Again Committee, the fundraising wing of his reelection campaign, is offering a t-shirt and “fine art, limited edition” poster commemorating the “Greatest Witch Hunt” in United States history this week.

“HOAXUS POCUS! The Greatest Witch Hunt in the history of the USA continues. The only people scared this Halloween are Shifty Schiff, Nervous Nancy and Democrat Hack Jerry Nadler about their chances in 2020!” reads the campaign website listing.

Hocus Pocus co-screenwriter Mick Garris has expressed his disgust at a pro-Trump cartoon that parodies the poster for the beloved 1993 supernatural comedy.

The image features the phrase “Stop the Witch-Hunt” — and replaces actresses Sarah Jessica Parker, Bette Midler, and Kathy Najimy with Democratic politicians Adam Schiff, Nancy Pelosi, and Jerry Nadler. The image is available to purchase as a “fine art poster” from the official Trump-Pence store.

“As one of the creators of Hocus Pocus, I am disgusted by this putrid act of evasion,” Garris tweeted Monday. “This is the worst president in our history, and I object in every way his attempt to co-opt, no matter how poorly, our creation. Leave our witches alone, oh Evil One.”

Imagine the Disney lawyers debating whether to sue the Trump campaign over this blatant Hocus Pocus ripoff https://t.co/0HKLWVeC4Q

This is the merchandise the Trump campaign is selling for Halloween 🎃

‘HOCUS POCUS 2’ is moving forward at Disney+ with writer Jen D’Angelo. The studio hopes to bring back the original cast. pic.twitter.com/TPGK4TaTgB