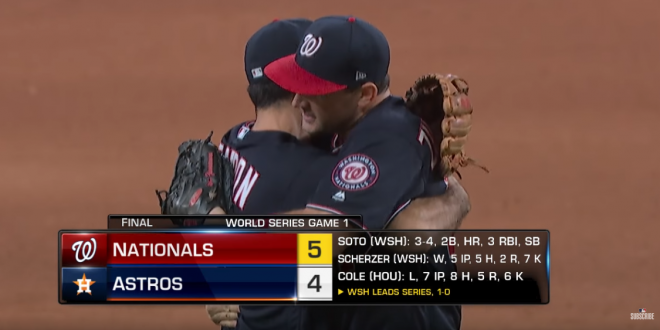 One of the Senate’s traditions is for lawmakers with a home state team in the World Series to bet against each other. Texas senators have wagered brisket and Dr Pepper against cheesecake and sausage in bets with counterparts from California, Illinois and Missouri.

But as the Houston Astros and Washington Nationals squared off Tuesday night in Game 1 of the Fall Classic, the Texans had no counterparts in the Senate with whom to place a bet, because the District of Columbia has no senators.

It’s not a state, and Texas Sens. Ted Cruz and John Cornyn have fought to keep it that way. Neither has announced a bet with any D.C. official or anyone else. In 2015, Cruz introduced measures to block D.C. laws regarding gay rights and contraception.

A DC-based team last made the World Series 86 years ago. As you can see above, last night the Nationals won their first game.

Previous Michael Cohen Offers Dirt On Giuliani’s Henchman
Next Former Acting AG: “Abuse Of Power Is Not A Crime”