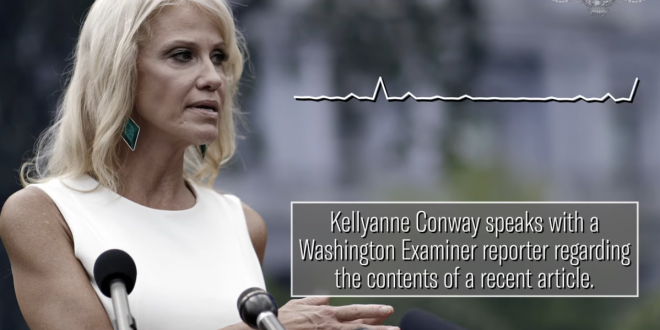 Kellyanne Conway Threatens Reporter For Writing About Her Husband, Who Only “Gets His Power Through Me”

Top White House aide Kellyanne Conway, describing herself as “a powerful woman,” aggressively and disparagingly told a female reporter that it was improper to write about her husband and threatened to investigate the reporter’s personal life. This journalist, a breaking news reporter for the Washington Examiner, had written an article on Tuesday about President Trump considering Conway, counselor to the president, as his next chief of staff, based on reporting from Bloomberg News.

After an offer to speak with an editor, Conway, who is notorious for berating journalists, told this reporter, 29: “Let me tell you something, from a powerful woman. Don’t pull the crap where you’re trying to undercut another woman based on who she’s married to. He gets his power through me, if you haven’t noticed. Not the other way around. And if these are the quote standards unquote at the Washington Examiner, then yes I’d be happy to talk to your editor. But I’ve known your editor since before you were born.”

Before ending the call, Conway threatened that the White House would delve into the personal lives of reporters if they wrote about her husband. “Listen, if you’re going to cover my personal life, then we’re welcome to do the same around here,” she said.

Whoa. Hit the link for MUCH more tea. And listen to the audio clip below.