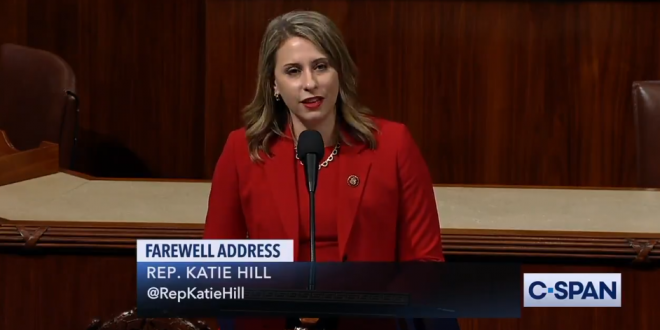 “I’m leaving because of a misogynistic culture that gleefully consumed my naked pictures, capitalized on my sexuality, and enabled my abusive ex to continue that abuse, this time with the entire country watching. Today is the first time I’ve left my apartment since the photos—taken without my consent—were released. And I’m scared.

“The forces of revenge by a bitter, jealous man; cyber-exploitation and sexual shaming that target our gender; and a large segment of society that fears and hates powerful women, have combined to push a young woman out of power.

“Yet a man who brags about his sexual predation, who’s had dozens of women come forward to accuse him of sexual assault, who pushes policies that are uniquely harmful to women, and who has filled the courts with judges who proudly rule to deprive women have the most fundamental rights to control their own bodies, sits in the highest office of the land.” – Rep. Katie Hill, in her farewell speech delivered shortly after she voted for impeachment on behalf of “the women of the United States.”

Katie Hill unloads: “I am leaving now because of a double standard. I am leaving because I no longer want to be used as a bargaining chip.” pic.twitter.com/oi5iN57FYr

Rep. Katie Hill: I am leaving now because of a double standard … I am leaving, but we have men credibly accused of sexual assault who are in boardrooms, in the Supreme Court, in this very body and, worst of all, in the Oval Office.

Katie Hill: “Today, as my final act, I voted to move forward with the impeachment of Donald Trump on behalf of the women of the United States of America. We will not stand down. We will not be broken.”pic.twitter.com/RPQCm4wdNK

Previous Butt-Dialing, The Prequel: That Time “Cybersecurity Advisor” Giuliani Locked Himself Out Of His iPhone
Next Fox News Anchor Chris Wallace Corrects Cultists: This Was A Coordinated Campaign, Not Just A Phone Call