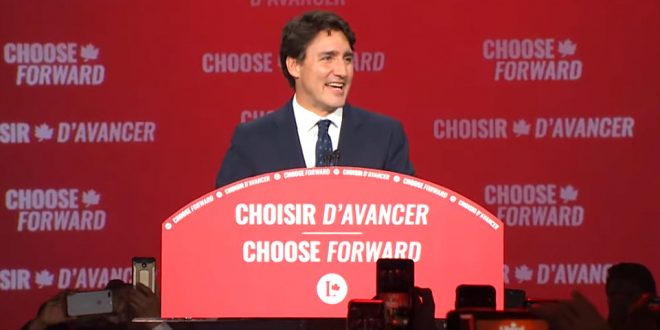 Prime Minister Justin Trudeau won a second term in Canada’s national elections Monday, losing the majority but delivering unexpectedly strong results despite having been weakened by a series of scandals that tarnished his image as a liberal icon.

Trudeau’s Liberal party took the most seats in Parliament, giving it the best chance to form a government. However, falling short of a majority meant the Liberals would have to rely on an opposition party to pass legislation.

The Canadian vote came down to what was essentially a choice between the handsome and charismatic Trudeau and Andrew Scheer, the Conservatives’ unassuming leader who was seen as the perfect antidote to Trudeau’s flash and celebrity.

Trudeau, one of the world’s most prominent progressive politicians, struggled to overcome the effects of two domestic scandals. His Liberals only won 156 seats, a decrease of 21, preliminary results showed.

He now looks set to govern with the left-leaning New Democrats, who have 24 seats. Together the two parties can muster a majority 180 seats in the 338-seat House of Commons.

Minority governments in Canada rarely last more than 2 1/2 years. Although the New Democrats lost 16 seats, leader Jagmeet Singh is now in a good position to press for action on priorities such as more social spending and increased action on climate change.

Congratulations to @JustinTrudeau on a wonderful and hard fought victory. Canada is well served. I look forward to working with you toward the betterment of both of our countries!