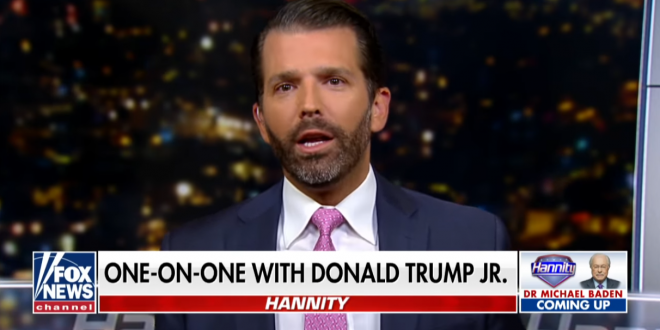 Junior: I’d Be Rich If My Daddy Were Joe Biden [VIDEO]

Donald Trump Jr. told Fox News’ Sean Hannity that he would be ‘really rich’ if only his dad were former Vice President Joe Biden: “I could go abroad and make millions off my father’s presidency.’

“I wish my name was Hunter Biden because I could go abroad and make millions off of my father’s presidency,” the son of President Donald Trump told Hannity in what appeared to be a not insignificant Freudian slip as Biden has never been president.

“I would be a rich guy. It would be incredible,” Trump Jr. continued, seemingly unaware of the implications of the argument he was making. “But because my name is Trump, if I took 1.5 dollars from China, not $1.5 billion like Hunter, but $1.5, their heads would explode.”