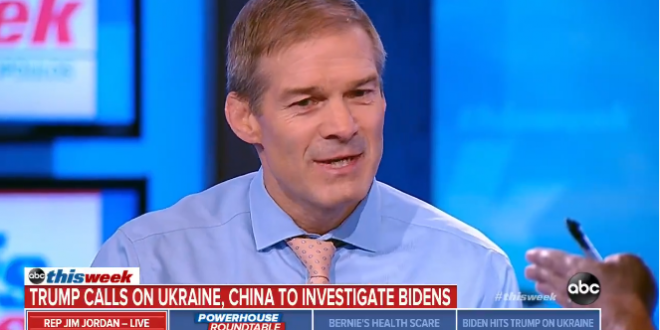 Rep. Jim Jordan (R-Ohio) on Sunday repeatedly refused to say whether he believed it was inappropriate for President Trump to call for Chinese authorities to investigate former Vice President Joe Biden and his son Hunter.

“You really think he was serious about thinking China’s going to investigate the Biden family? I think he’s getting the press all spun up about this,” Jordan said on ABC’s “This Week” Sunday as ABC’s George Stephanopoulos repeatedly pressed him on the appropriateness of the statement last week.

“He was just making a statement to underscore how wrong what took place here is. I don’t think anyone in America really believes the president of the United states thinks China is going to investigate,” Jordan said.

Ranking member of the House Oversight Committee Rep. Jim Jordan on Pres. Trump’s public comment that China should investigate the Bidens: “As Senator Rubio said a couple days ago, I think he’s getting the press all spun up about this.” https://t.co/zGLt1Eh2Zr pic.twitter.com/8kjiseRyd9