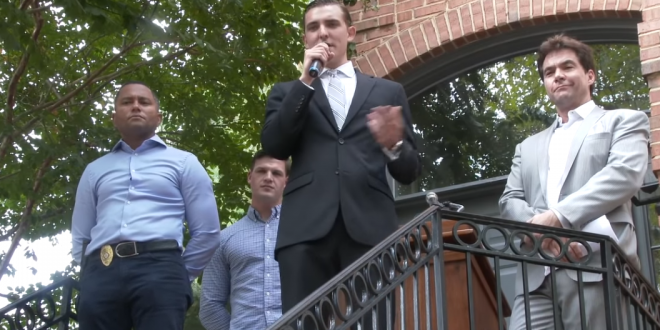 Kelvin Whelly, a self-described Marine-turned-male-escort, stepped up to the podium alongside Wohl and Burkman. Without any proof, he claimed to have engaged in a series of increasingly ludicrous sex acts with Warren after meeting her on male escort site “Cowboys4Angels.”

Wohl and Burkman repeatedly leaned on Whelly’s military service as a “combat veteran” in Afghanistan as proof that his allegation was credible.

“Are you laughing at our troops?” Burkman yelled at a crowd of hecklers who assembled on the street in front of Burkman’s Alexandria townhouse that has become a familiar setting for their stunts. “Do you think his service in Afghanistan is funny?”

You know where this is going, right? Hit the link for what you already know. Oh and Cowboys4Angels never heard of him either. Below is the entire laughable press conference. And you will laugh.