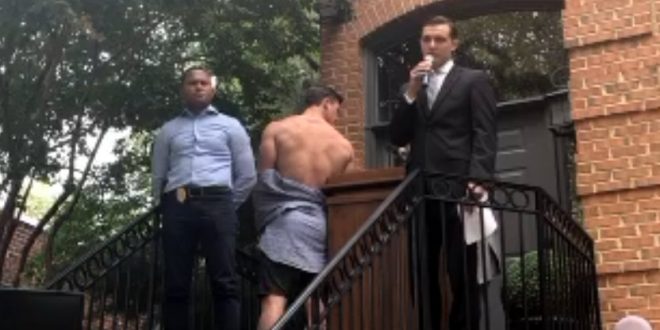 Kelvin Whelly is the U.S. Marine who says he was paid by Senator Elizabeth Warren to have an affair with her in 2018. Whelly, 25, was brought into the spotlight by right-wing activists Jacob Wohl and Jack Burkman at a press conference on October 3. Wohl has previously admitted that he promotes false news if it helps President Trump.

Whelly told the media that he met Senator Warren through the website, Cowboys4Angels. Whelly said that he first went to a Hilton Hotel in Woburn, Massachusetts, to meet Warren on August 8, 2018.  Whelly said that he had spent time women before professionally as a male escort, but never a woman over 60.

As you can see below, the entire scam fell apart even faster than the pair’s attack on Mayor Pete.

At this point, the media only attends Wohl’s events for their own amusement.

Wohl’s emissary delivered 50 copies of the sheet below, and then ran back into the house. pic.twitter.com/Rd7XuAN00n

Wohl and Burkman are trying to look really serious but their fake Warren accuser keeps cracking up as he reads his statement. They don’t look thrilled.

Now the accuser is taking off his shirt for some reason. Wohl and Burkman day this is proof of something.

The press conference is being drowned by out by Chumbawamba. Jacob tells the security guard to remove a heckler, but the guard appears to refuse on the grounds that the man is on public property.

There is a man using a speaker to play music to blare music over Burkman and Wohl… pic.twitter.com/aPLpWl3Wjd

Burkman gets mad about people in the crowd laughing… pic.twitter.com/X2yfoo7OrL

The patsy in Jacob Wohl’s latest sex smear says he got a scar from a sexcapade with Elizabeth Warren. His Insta shows something else. pic.twitter.com/fK5HPJT3HX

Jacob Wohl: “Trump is premier alpha male so HIS extramarital affairs are understandable. Elizabeth Warren is a very old woman.”

The supposed “sex scar” from Jacob Wohl’s accuser is just from a chain from a swingset. Asked about this, the accuser just shrugged. https://t.co/vE0jqtzPGi

This Jacob Wohl press conference is genuinely one of the funniest things I’ve watched recently.https://t.co/NwDiakhJCC