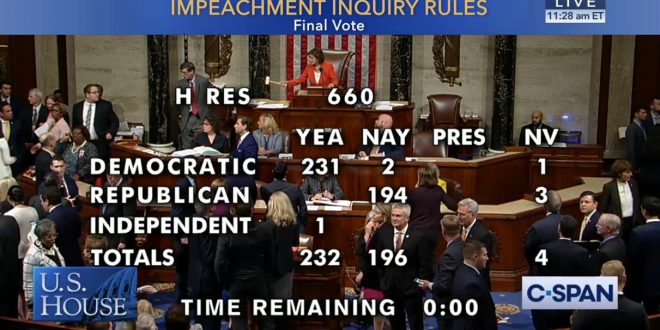 The U.S. House of Representatives on Thursday approved eight pages of procedures to take the impeachment inquiry against President Trump to nationally broadcast public hearings. The resolution defining the scope of the next phase of the inquiry was approved mainly along party lines, 231-196.

The House will move ahead with impeachment proceedings against Trump after a whistleblower’s claims the president used the power of his office to solicit a foreign government to influence the 2020 U.S. election. Much of the testimony and documents released after the claim have supported the whistleblower’s account.

House passes the measure setting up its impeachment probe strategy, 232-196.

No Republicans voted for it. https://t.co/tWHb61yDJf