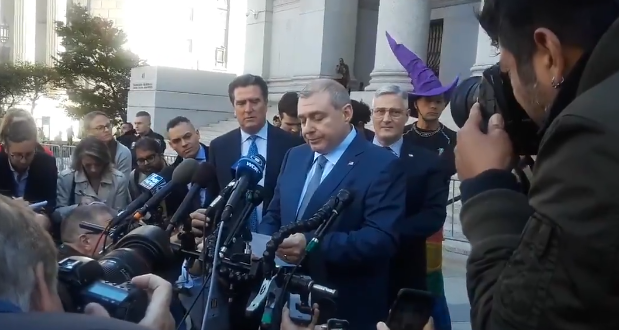 Two of Rudy Giuliani’s associates appeared in federal court Wednesday in Manhattan, where they pleaded not guilty to charges of illegally funneling foreign donations to U.S. political candidates. Lev Parnas and Igor Fruman are both U.S. citizens born in the former Soviet Union: Parnas in Ukraine, and Fruman in Belarus.

The case is happening amid the larger impeachment inquiry into President Trump’s alleged withholding of aid to Ukraine while pressuring it to investigate Joe Biden, Trump’s potential 2020 rival. Investigators are exploring the nature of Rudy Giuliani’s relationship to Parnas and Fruman as it relates to Ukraine.

NEW: Lev Parnas and Igor Fruman, associates of President Trump’s personal attorney, Rudy Giuliani, pleaded not guilty to federal campaign finance crimes in a brief court appearance in Manhattan, with Parnas telling reporters after, “I will be vindicated.” https://t.co/mxAjEf9pym pic.twitter.com/ujIkj5OerK

Parnas & Fruman pleaded not guilty. Most interesting part was Parnas’ lawyer saying he’s concerned that some of the info that the prosecution will uncover in discovery (emails, documents, etc.) could “violate executive privilege,” & that Guliani & Parnas worked for each other.

"I hope to be vindicated in the end," said Lev Parnas after pleading not guilty for charges that he funneled illegal foreign funds. pic.twitter.com/6FJgimKKvk

Previous Ukraine President Held Meeting About Trump And Giuliani’s Pressure On Bidens Before Even Taking Office
Next Tony Perkins: Send Me Money To Stop Impeachment