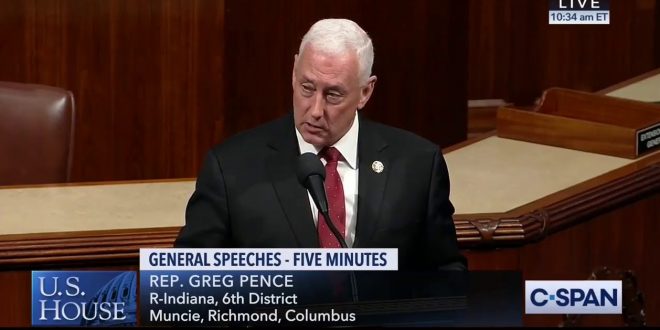 U.S. Rep. Greg Pence is asking supporters to donate to his October End of Month Impeachment Defense Fund. “We need 60 Sixth District Hoosiers to chip in and fight back against radical House Democrats who are impeaching President Trump based on fake allegations,” Pence emailed friends on Tuesday. The email calls the impeachment inquiry into President Trump “the most pivotal turning point for conservative values since President Trump took office.”

“Now, it’s up to us to fight back,” the solicitation reads. “That’s why my team has established the … Impeachment Defense Fund, so that I can continue fighting for the Make America Great Again movement and stop the influence of radical leftists in Congress who want to silence conservatives and overturn the results of the 2016 election.” The urgent plea asks supporters to chip in as little as $5 by the end of this month to fight the “unhinged,” “socialist” Democrats.

After seven weeks of running a communist-style, ultra-partisan effort to undo the 2016 election results under the disguise of a sham impeachment process, @SpeakerPelosi claims she wants to now add transparency to a widely discredited process. (1/4)

.@SpeakerPelosi needs to come clean and explain to the American people why she chooses to conduct a secret investigation that leaks cherry-picked information to the press rather than allowing every Representative to participate in this grossly flawed process. (2/4)

It’s too late to right this crooked ship. We can only assume @SpeakerPelosi places her extreme opposition to @realDonaldTrump over working on behalf of the American people. (3/4)

Until all Members of Congress are able to see and report to their constituents what is going on with the “impeachment proceedings,” I refuse to participate in this sham process. (4/4)