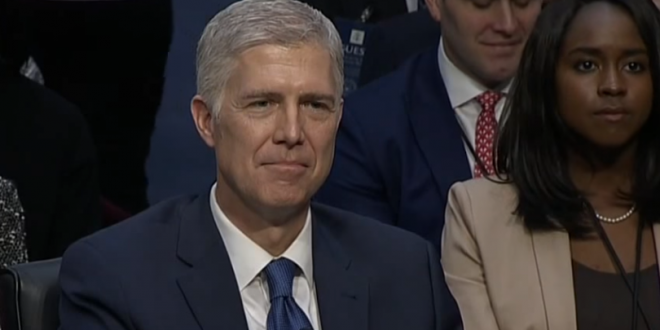 U.S. Supreme Court justices on Tuesday appeared divided over whether a landmark decades-old federal law prohibiting sex discrimination in the workplace protects gay and lesbian employees as they heard arguments in one of the biggest cases of their current term.

Liberal justices signaled sympathy toward arguments that gay workers are covered under Title VII of the Civil Rights Act of 1964, which forbids employers from discriminating against employees on the basis of sex as well as race, color, national origin and religion.

Some conservative justices expressed reservations toward extending protection to gay employees. However, one of them, Justice Neil Gorsuch, asked questions of both sides indicating potential sympathy for the workers. When analyzing whether a person was fired on the basis of sexual orientation, Gorsuch said sex seemed to be a “contributing cause.”

In separate cases, the court is considering whether the main federal job-bias law, known as Title VII, outlaws LGBT discrimination. The key question is whether employer decisions based on sexual orientation and gender identity qualify as discrimination because of sex, which Title VII explicitly prohibits.

Gorsuch, a Donald Trump appointee who focuses heavily on the words of disputed statutes, said that sex was at least a “contributing cause” to a decision to fire someone because of sexual orientation.

His comments came during the session’s first hour, which focused on sexual orientation. A second hour is centering on gender identity. Another conservative justice, Samuel Alito, was skeptical of the gay workers’ claims, telling their lawyer at one point that “your whole argument collapses.”

“It was quite a day. After hearing the Supreme Court justices’ questions today, we are hopeful and there are many reasons to be optimistic,” said Gregory Nevins, Senior Counsel and Employment Fairness Project Director for Lambda Legal. “If the Court simply applies the law as written, LGBTQ workers win. The text of Title VII is as clear as day: if an employer refuses to hire, dismisses, or mistreats an employee ‘because of’ that employee’s sex, they are in violation of the law.

In two cases, Altitude Express v. Zarda and Bostock v. Clayton County, the Court is looking at whether Title VII ban of sex discrimination covers claims of sexual orientation discrimination. And in R.G. & G.R. Harris Funeral Homes v. EEOC, the Court is considering whether Title VII’s sex discrimination provision protects transgender workers. A growing number of courts have agreed that Title VII does indeed, prohibit discrimination on the basis of sexual orientation and gender identity. But if the Supreme Court rules against the employees, it will leave vulnerable many LGBTQ workers who don’t have local or state-level protections.

“A lot is at stake here. The Court effectively could take away rights from LGBTQ workers that have been established by multiple federal courts, confirmed by the EEOC, and accepted by the overwhelming majority of American people,” added Nevins. “We need the Court to clarify once and for all that discrimination against LGBTQ workers is unlawful sex discrimination so that people everywhere can bring their whole selves to work and not be forced to hide. If they just follow the text of the law that should be fairly easy.”

Gorsuch looks like the swing vote in the LGBTQ discrimination cases.

After Title VII arguments, Justice Gorsuch think the textual arguments are a close thing, but he’s worried about court going beyond its role and the “massive social upheaval” that could result from a ruling in favor of plaintiffs

During second argument, much discussion of bathrooms and Title IX which is not the issue before the court. Liberal justices skeptical of the “parade of horribles” presented by the employers saying that Title VII should not protect LGBT people

Reposting w/out typo: After Title VII arguments, Justice Gorsuch seems to think the textual arguments are a close thing, but he’s worried about court going beyond its role and the “massive social upheaval” that could result from a ruling in favor of plaintiffs

Out of arguments and my first thought is Gorsuch is closer on these cases than I expected.

Except, 21+ states have these laws now, including his beloved Colorado, where he was law professor.

There’s been no upheaval.

Gorsuch claimed that interpreting Title VII to protect LGBTQ employees will cause “massive social upheaval.” He gestured toward open-mindedness on the textual argument but I think he will vote against LGBTQ rights.

SCOTUS arguments on Title VII just concluded. I’ll offer my intial take, which will soon be up on the @WashBlade website.

Among my observations is that LGBT people *might* find a surprise ally in Justice Gorsuch.